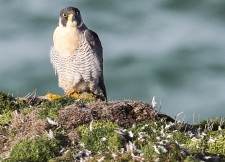 The Peregrine Falcon is the ultimate winged predator. The fastest living creature on the planet, it has been recorded at 254 mph diving for its prey. Flying on the level without wind assistance it cruises at 60 mph. It’s eyesight is such that it could tell the colour of your eyes at 1 mile distance. It was on the verge of extinction in the UK in the 1960s through persecution and being poisoned by agricultural chemicals. Over the last 50 years it has slowly recovered and there  are now about 1,500 pairs.

As a bird watcher for many years it has been my ambition to see one of these fantastic birds at a distance where I could see the detail of their feathers. Over the last 30 years I have seen several at a distance, but never close to. That was until last week.  On a sunny weekend afternoon my wife and I were walking our dogs on a cliff top walk that we know well, when I suddenly spotted a peregrine sat amongst a pile of feathers on a little cliff top promontory.  It could see us and did not seem unduly bothered, so we approached it slowly till we could see it clearly with our naked eyes.  I did not have a camera with me, so of course it posed for me in the sun.  As we were looking at the bird another peregrine started shrieking in the sky above us, before it dived past us and settled on a cliff ledge a little way away. We has stumbled across a feeding ground and wind shelter for a pair of peregrines. After a short while they both flew off.

The site was about 15 minutes from cottage we were staying in, so during the course of the next week I repeatedly revisited the site. In photographic terms the conditions were dreadful, grey cloud, wind mist and rain were the predominant conditions.  On most occasions I saw the peregrines in the air, mere specks in the distance and on the two times one was on the cliff ledge it resolutely kept its back to me.

On our last afternoon, the sun was out and I went up for a final time. There again was a peregrine on the cliff top amongst a scattering of feathers with the sun shining on its chest. I was about 50 yards away and it had its beady eyes on me.  To get a photograph I really needed to halve the distance without disturbing the bird.  I just walked as slowly as I could one pace at a time allowing the bird to watch me.  When I got to where I wanted to be, I slowly sat down and then started taking pictures.  I needed to take as many as I could because with a long lens in high winds there was a real risk of motion blur and focusing on the bird was hit and miss. I sat there for about 5 minutes before the bird calmly flew off and I got an image of it flying as well.

Like most wildlife photography, the images are a result of luck and perseverance 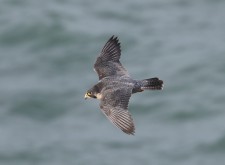